Torrance is a coastal U.S. city in the South Bay (southwestern) region of Los Angeles County, California, in the Los Angeles metropolitan area. Torrance has 1.5 miles (2.4 km) of beaches on the Pacific Ocean. Torrance has a moderate year-round climate with warm temperatures, daily sea breezes, low humidity, and an average rainfall of 12.55 inches per year.[8] It is immediately bordered by Lomita to the east, Gardena and Lawndale to the north, Redondo Beach and the Pacific Ocean to the west, and Rolling Hills and Palos Verdes Estates to the south.

Since its incorporation in 1921, Torrance has grown to a population at the 2010 census of 145,438.[9] This residential and light high-tech industries city has 90,000 street trees and 30 city parks.[8] Known for its low crime rates, the city consistently ranks among the safest cities in Los Angeles County.[10] Torrance is the birthplace of the American Youth Soccer Organization (AYSO). In addition, Torrance has the second-highest percentage of residents of Japanese ancestry in California (8.9%).[11]

Torrance Unified School District (TUSD) was established in 1947 and unified in 1948. The district comprises the City of Torrance, bordered by the Palos Verdes Peninsula on the south, the cities of Redondo Beach and Gardena on the north, the City of Los Angeles (Harbor Gateway) on the east and the Pacific Ocean on the west. The district's jurisdiction includes approximately 21 square miles (54 km2), and it operates 17 elementary schools, eight middle schools, five high schools (one of which is a continuation school), three adult education centers, and a child development center. 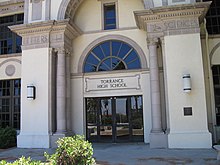 Torrance High School is one of the oldest high schools in California, having opened in 1917. The school is a popular filming location.[78]

Find a Home in Torrance

See All Neighborhoods
Based on information from CARETS as of Feb 23, 2020 4:12:pm. The information being provided by CARETS is for the visitor's personal, noncommercial use and may not be used for any purpose other than to identify prospective properties visitor may be interested in purchasing. The data contained herein is copyrighted by CARETS, CLAW, CRISNet MLS, i-Tech MLS, PSRMLS and/or VCRDS and is protected by all applicable copyright laws. Any dissemination of this information is in violation of copyright laws and is strictly prohibited. Any property information referenced on this website comes from the Internet Data Exchange (IDX) program of CRISNet MLS and/or CARETS. All data, including all measurements and calculations of area, is obtained from various sources and has not been, and will not be, verified by broker or MLS. All information should be independently reviewed and verified for accuracy. Properties may or may not be listed by the office/agent presenting the information.
Based on information from California Regional Multiple Listing Service, Inc. as of Feb 23, 2020 4:09:pm. This information is for your personal, non-commercial use and may not be used for any purpose other than to identify prospective properties you may be interested in purchasing. Display of MLS data is usually deemed reliable but is NOT guaranteed accurate by the MLS. Buyers are responsible for verifying the accuracy of all information and should investigate the data themselves or retain appropriate professionals. Information from sources other than the Listing Agent may have been included in the MLS data. Unless otherwise specified in writing, Broker/Agent has not and will not verify any information obtained from other sources. The Broker/Agent providing the information contained herein may or may not have been the Listing and/or Selling Agent.